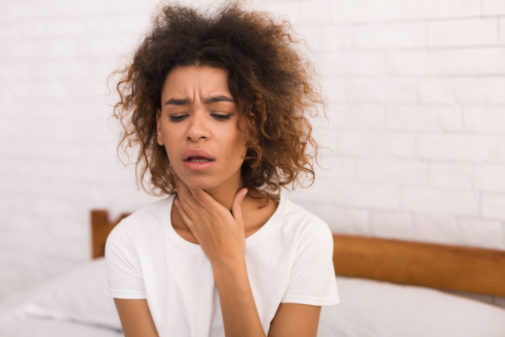 Nearly half of pregnant women will experience heartburn at some point in time during their pregnancy and it’s one of the most common complaints, according to a National Center for Biotechnology Information study.

What exactly is heartburn and why does it happen?

“Heartburn (also known as gastroesophageal reflux disease or GERD) is felt when acid from the stomach, instead of going toward the lower GI tract, comes back up the esophagus. There is a sphincter (the lower esophageal sphincter) which functions as a valve that normally prevents the acid from traveling backwards,” Dr. Pinkard says. “For certain reasons this valve may not work as well as it should.”

Heartburn can also be associated with nausea and vomiting during pregnancy, she adds. Common symptoms can include:

Dr. Pinkard explains that women undergo so many hormonal changes during pregnancy, and the increase in the hormone progesterone, causes the sphincter that separates the stomach from the esophagus to becomes weaker, allowing acid into the esophagus. This change starts in the first trimester which is why some women start experiencing symptoms early in the pregnancy, even before the pregnancy begins to show.

“Also, in the second and third trimesters as the baby grows, there is less room for the stomach and some acid is more likely to work its way up,” she says.

What are some tips to prevent heartburn?

Dr. Pinkard recommends the following five tips to ease heartburn symptoms while pregnant (or not):

What are treatment options?

If you are experiencing heartburn symptoms, it’s important to discuss them with your doctor at your next prenatal appointment.

Dr. Pinkard says that many physicians may recommend a calcium carbonate supplement (which can be found Tums).

“Over the counter medications to avoid: antacids containing the ingredient magnesium trisilicate (Gaviscon),” she adds. “Sodium bicarbonate found in Rolaids and Alka-Seltzer when used throughout pregnancy can also put mom and baby at risk for fluid overload. Talk with your doctor before starting either of these medications in pregnancy.”

Dr. Pinkard says that if diet and lifestyle changes are not helping, your doctor may recommend prescription or over-the-counter medication.

“If your symptoms are severe, your doctor may recommend a consultation with a GI specialist,” she says. “Heartburn is very common and uncomfortable, however if you are experiencing severe chest or abdominal pain or have other sudden changes in your health, call your doctor or go to your nearest emergency room for evaluation.”

“Typically, symptoms resolve quickly after delivery,” Dr. Pinkard says. “If your symptoms persist after your baby is born, discuss this with your primary care provider or OB/GYN.”