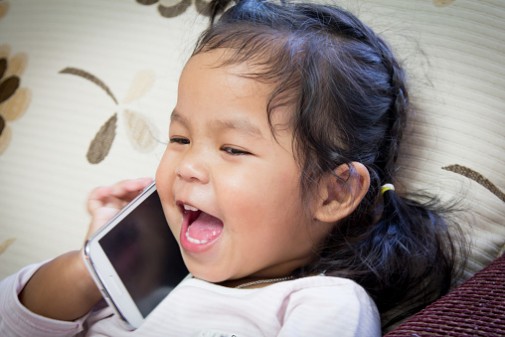 Cell phones were once giant bricks used only by a few adults, but over the past decade, carrying a cell phone has become second nature for most. The use of these devices has also trended younger with parents purchasing phones for their teens, and now some elementary school children have cell phones.

The average age children receive their first cell phone is 6 years old, and 53 percent of children have a cell phone by the time they turn 7, according to a survey by vouchercloud.net of nearly 2,300 parents with children between the ages of 11 and 16.

When parents were asked why they decided to get their child his or her first cell phone, 31 percent made the purchase for security reasons, 25 percent to communicate with friends and family, and 20 percent to keep up with friends at school.

“Studies show that before middle school, kids who have cell phones don’t use them for communication,” says Dr. Christopher Jamerson, pediatrician with Advocate Children’s Medical Group in Park Ridge, Ill. “Instead, they mostly use them to watch videos and play games. Once they get into middle school or early high school, it becomes much more of a social tool.”

When giving a child of any age a cell phone, Dr. Jamerson recommends following guidelines from the American Academy of Pediatrics Family Media Use Plan.

For children and teens: